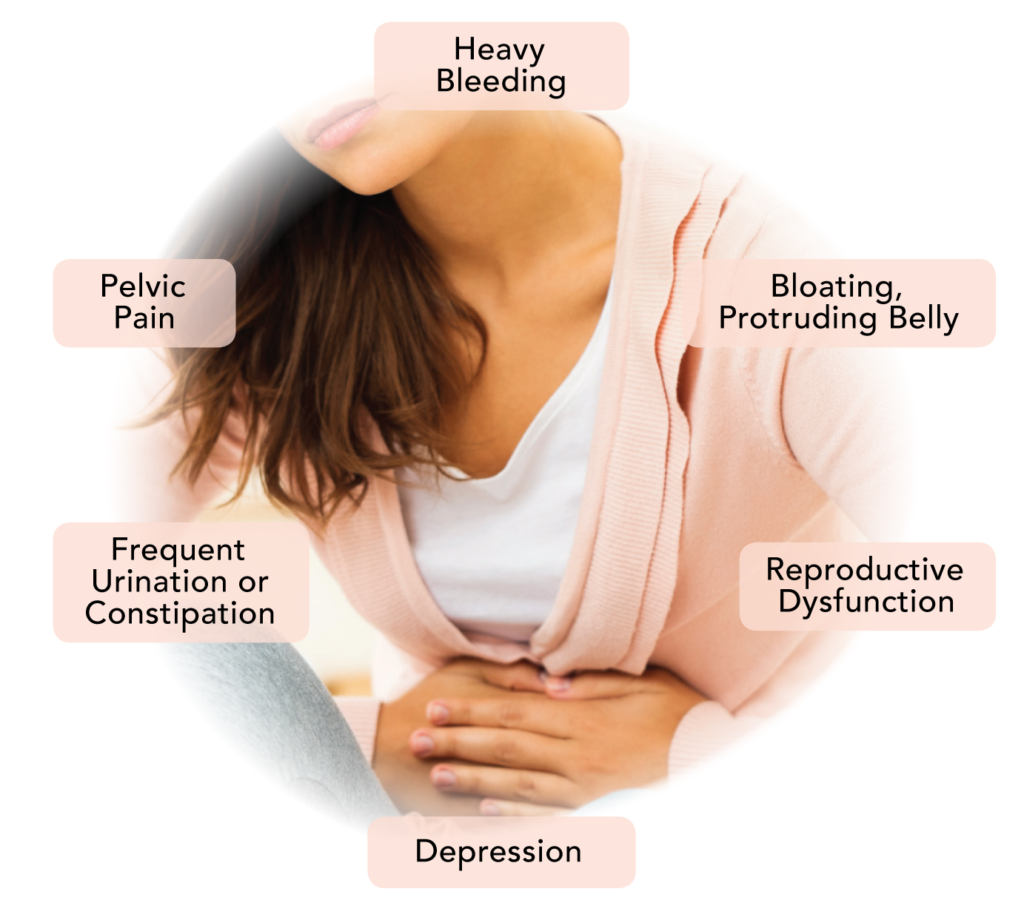 Fibroids are the most frequently seen tumors of the female reproductive system. Fibroids, also known as uterine myomas, leiomyomas, or fibromas, are firm, compact tumors that are made of smooth muscle cells and fibrous connective tissue that develop in the uterus. It is estimated that between 20 to 50 percent of women of reproductive age have fibroids, although not all are diagnosed. Some estimates state that up to 30 to 77 percent of women will develop fibroids sometime during their childbearing years, although only about one-third of these fibroids are large enough to be detected by a health care provider during a physical examination.

In more than 99 percent of fibroid cases, the tumors are benign (non-cancerous). These tumors are not associated with cancer and do not increase a woman’s risk for uterine cancer. They may range in size, from the size of a pea to the size of a softball or small grapefruit.

While it is not clearly known what causes fibroids, it is believed that each tumor develops from an aberrant muscle cell in the uterus, which multiplies rapidly because of the influence of estrogen.

Who is at risk for fibroid tumors?

Women who are approaching menopause are at the greatest risk for fibroids because of their long exposure to high levels of estrogen. Research has also shown that some factors may protect a woman from developing fibroids. Some studies, of small numbers of women, have indicated that women who have had two liveborn children have one-half the risk of developing uterine fibroids compared to women who have had no children. Scientists are not sure whether having children actually protected women from fibroids or whether fibroids were a factor in infertility in women who had no children. The National Institute of Child Health and Human Development is conducting further research on this topic and other factors that may affect the diagnosis and treatment of fibroids

What are the symptoms of fibroids?

Heavy or prolonged menstrual periods
Abnormal bleeding between menstrual periods
Pelvic pain (caused as the tumor presses on pelvic organs)
Frequent urination
Low back pain
Pain during intercourse
A firm mass, often located near the middle of the pelvis, which can be felt by the physician

In some cases, the heavy or prolonged menstrual periods, or the abnormal bleeding between periods, can lead to iron-deficiency anemia, which also requires treatment.

How are fibroids diagnosed?

Transvaginal ultrasound (also called ultrasonography). An ultrasound test using a small instrument called a transducer, that is placed in the vagina.

Magnetic resonance imaging (MRI). A non-invasive procedure that produces a two-dimensional view of an internal organ or structure. Hysterosalpingography. X-ray examination of the uterus and fallopian tubes that uses dye and is often performed to rule out tubal obstruction.

Hysteroscopy. Visual examination of the canal of the cervix and the interior of the uterus using a viewing instrument (hysteroscope) inserted through the vagina.

Endometrial biopsy. A procedure in which a sample of tissue is obtained through a tube which is inserted into the uterus. Blood test (to check for iron-deficiency anemia if heavy bleeding is caused by the tumor).